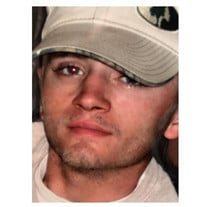 Abbeville - A Private Memorial Service will be held at a later date for Zachary Joseph Hebert, age 35, who passed away on Monday, March 14, 2022, in Lafayette, Louisiana. Zachary Joseph Hebert was born on December 1, 1986 in Abbeville, Louisiana and he was a life long resident of Vermilion Parish. He was an avid outdoorsman who enjoyed canoeing, fishing, nature and all things outdoors. He was also an animal lover, and he always owned a dog. More than anything Zachary was a family person, he helped to care for his ailing grandmother until her death. He will be remembered as a kind, loving and forgiving person, who cherished his relationships with his family and friends. He will be dearly missed. Brent is survived by his sister, Tasha Lee Hebert of Youngsville; his aunts, Brenda Suire (Sanford) of Abbeville, Delores Harrington of Meaux, Roxanne Cormier (Howard) of Meaux, and Rhonda Hebert of Meaux; his uncle, Raymond Hebert; his nephew, Cullen Trahan; his niece, Raquel Savoy; his cousins, Kane Cormier, Timmy Harrington, Karri Harrington, Leslye Broussard, Dax Broussard, Colton Broussard, Seth Broussard, Caleb Broussard, and Louise Hebert; as well as his girl friend, Mallan Allan. He was preceded in death by his parents, Michael Brent Hebert and Robin Hebert; his paternal grandparents, Doris "gro beb" and Wilda Hebert; as well as his maternal grandparents, Maxie and Louise Hebert. Cypress Funeral Home & Crematory, 206 West Lafayette St., Maurice, LA. 70555, (337) 740-3123, is in charge of Cremation arrangements.

The family of Zachary Joseph Hebert created this Life Tributes page to make it easy to share your memories.

A Private Memorial Service will be held at a later...