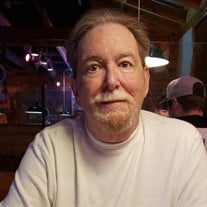 Lafayette - William "Wes" Early Seat IV, age 76, passed away peacefully on Sunday, November 21, 2021 in Lafayette, Louisiana. A Memorial Service will be held at a later date. Wes is survived by his loving wife of 37 years, Janet Marie Stelly; his children, Kimberly Seat Jones, Sean Mathew Seat, Misty Stelly Spell; his grandchildren, Grace Jones, Tiara Johnson, Amanda Olive, Jade Patrick, Kelie Young, Kiya Young; his great grandchildren, Ezra Olive Ira Olive, Rhett Johnson; his brother, Richard Lee Seat; as well as the mother of his children, Charlotte Jean Roberts. He was preceded in death by his parents, William Early Seat III and Edna Lucille Seat; as well as his sister, Margaret Ann Crank. "Words of reflection by Wes's brother, Richard Lee Seat" William E. Seat IV was born on June 17, 1946 in El Paso Texas, his dad would travel quite a bit following work in the West Texas oil fields and the bridge construction industry. In the year 1948 the small family had moved to Pocahontas, Mississippi where Bill, as he was called, saw the arrival of a younger sister, Margaret Ann. Bill’s dad was a bit of a gypsy. In 1950 the family went on an afternoon ride in the country and ended up in Houston, Texas. This became the Seat family’s permanent home after the birth of Bill’s brother Richard Lee in 1953, and the purchase of a house where all three kids would grow up. Bill was a very popular young man, a good student and athlete. Attended Black junior high and Waltrip high schools. After high school Bill would take a job as mechanical designer with a local architectural firm. The next couple years included a move to Fort Worth and a new job. During his time in Fort Worth Bill became very fond of new fast cars, I mean after all it’s 1966 and muscle was the theme. The only thing that stood in his way was not being old enough to borrow the money. Quick answer, a lawyer, emancipation, a judge and father willing to sign the documentation. Success = 1966 Plymouth Satellite!! In about 1968 "Wes" as he is now called, made his way back to Houston. The new handle came from his initials on all of his drawings in the architectural world. Seems there was more than one Bill in the drafting room and his initials made it natural to call him WES because of his initials. He soon met Charlotte Jean Roberts, they married and moved to fashionable West University Place where they would remodel three houses and have two children, Kimberly Paige and Sean Mathew. Over the next decade the young couple spent much of their time building careers, remodeling housing and looking to the future. In 1981 an offer for teaching at USL for Charlotte began their move to Lafayette. The next few years had Wes starting a business, navigating the bottom dropping out of the oil industry and many other changes involving the entire family. In 1984 Wes began a new chapter of his life, with the marriage to Janet Marie Stelly and her daughter Misty added to his family. The next 37 years would have many adventures, and in some ways returned Wes back to his father’s gypsy view of life. Over the year the couple would have homes with remodeling projects in three states and seven cities. These included Palmyra and Kansas City Missouri, Bryan and Houston Texas, Covington and Lafayette Louisiana twice. Wes would also continue his work with his company Endeavors, as well as spend a great deal of time at Jacobs Engineering in both Baton Rouge and Houston. Wes was not only prolific as reader but also an extremely fast learner. I often told friends that after my brother read Doctor Zhivago he could sit down in a Russian restaurant and order a meal. It was just the kind of guy he was, not stopping with the words on the page, but instead he further researched to find the intent and usage of them. Through the years my brother also had many hobbies, and he was never satisfied with a partial understanding of those hobbies. For example, that beautiful 1966 Plymouth Satellite, was in his quest to be the best turned from a stock show room beauty, to a fire breathing two four barrel with cast-iron headers, custom ignition and aviation gas, that literally melted down on the racetrack after many a weekend victory. Over the next 50 years Wes added photography, tennis, jewelry design/creation, skeet shooting and collecting of guns, fountain pens and shaving instruments. Like many of us I believe diving off into these areas of hobbies, he kept not only his mind very busy, but also through these passions he was able to live parts of his life that he felt were missing. Now back in Lafayette, Wes and Janet they were in the middle of remodeling their forever house. They had purchased the house that Janet grew up in, and had it moved to a piece of property she inherited from her mother and father, and is now in the process of being turned into the house for the rest of their lives. William Early Seat IV will be dearly missed by family, friends and acquaintances from hundreds of coffee shops (Waffle House in particular) and flea markets around the country. Wes never met a stranger, he always had time to hear and learn about your life. As we grew up he always had my back, and showed me by protecting me many times picking me up off the streets. It is my hope that through these brief words you may know him better, I thank God that I now do. Cypress Funeral Home & Crematory, 206 West Lafayette St., Maurice, LA. 70555, (337) 740-3123, is in charge of Cremation arrangements.

The family of William "Wes" Early Seat IV created this Life Tributes page to make it easy to share your memories.