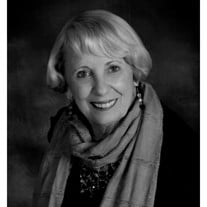 Lafayette – A celebration of life/memorial service will be planned for a safer time for our beautiful, vibrant mother, Willanna Edwards (Curley) James, 95, who passed away on February 11, 2021. Willanna was a devoted member of First United Methodist Church, an avid sports fan of the ULL Ragin Cajun Athletics, a Volunteer Extraordinaire (Lourdes), and a retired secretary and music teacher. Willanna was also a wonderful mother, grandmother, and great-grandmother. Her greatest pride was her legacy of nine grandchildren, and nine great-grandchildren, to date. She is survived by her four daughters, Diana Curley Trahan, and Karen Curley (David) Daniel, both of Lafayette, LA; Janet Curley Mottinger of Palm Beach Shores, FL, and Connie Curley (Charles) Golson, of Austin, Texas. She had a host of very special nieces and nephews, including Sister Carmelita (Virginia Louise) Latiolais, and Martin Latiolais, both of Lafayette, LA. She is also survived by her stepmother, Vonnie Edwards. She was preceded in death by her parents, William Kavanaugh Edwards and Anna Mary Gumm Edwards; Her first husband, Sidney Curley; and her second husband, Jesse (Jay) James; Her three sisters: Virginia Hilburn, Martha Ogden, and Finnetta Ferguson; her nephew, Charles Robert Latiolais; and her son-in-law, Ralph W. Mottinger. They will all welcome her to heaven with open arms! In lieu of flowers, a donation can be made to her beloved First United Methodist Church at fumc.org or The University of Louisiana Lafayette Foundation. Online obituary and guestbook may be viewed at www.CypressFunerals.Com Cypress Funeral Home & Crematory, 206 West Lafayette St., Maurice, LA. 70555, 337-740-3123, is in charge of arrangements.

Lafayette &#8211; A celebration of life/memorial service will be planned for a safer time for our beautiful, vibrant mother, Willanna Edwards (Curley) James, 95, who passed away on February 11, 2021. Willanna was a devoted member of First... View Obituary & Service Information

The family of Willanna Edwards (Curley) James created this Life Tributes page to make it easy to share your memories.

A celebration of life/memorial service will be...

Send flowers to the james family.