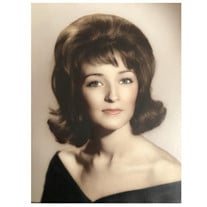 Abbeville - A Memorial Mass will be held on Monday, April 11, 2022, at 3:30 PM in St. Mary Magdalen Catholic Church in Abbeville, Louisiana for Veronica D. Deblanc, age 79, who passed away on Wednesday, March 6, 2022, in Abbeville, Louisiana. Fr. Donald Bernard of St. Mary Magdalen Catholic Church will conduct the Memorial Mass. Veronica DeBlanc was born on August 3, 1942, in St. Martinville, Louisiana and she was a resident of Lafayette Parish for many years. She was an amazing person who would be the shining light in any space she came into. She had a knack for conversation, and there were no strangers amongst her. She was an incredibly talented artist of all things, she could create anything that she felt she wanted to, from painting, knitting, crocheting, sewing, etc. She had the biggest heart and huge love for her kids and family. She was an extremely independent woman with firm beliefs of staying true to herself. Veronica was quite an adventurous lady who shared that passion with her kids. She had an incredible level of kindness with anyone and thrived on helping others. She also had a deep connection with God and allowed that guidance in her life. She has left a huge mark upon this world in so many ways and we are all so grateful to have had her for the time we had. She was an amazing mother that gave great strength to her kids, there will be no one else like her. Veronica was survived by her children, Lisa Dayton & Nicole Crochet; her grandchildren, Brett Dayton, Holly Menna, Casey Dayton, Jacob Orgeron, and Christian Orgeron; her great grandchildren, Avenlia & Cambria Dayton (Brett & Amelia Dayton), Addis & Dewhit Menna (Tekki & Holly Menna), Jonah, Ainsley & Corbin Dayton (Casey & Emily Dayton); her siblings, Dolly LeMaire, Louise DeBlanc, Melanie Pogue, Catherine DeBlanc, and Michael DeBlanc. Preceded in death by her sons, James Orgeron, and Sean Orgeron; her parents, Bertrand and Lillian DeBlanc; her siblings, Daniel DeBlanc, Bertrand DeBlanc, and Denise Burris. In lieu of flowers memorial contributions may be made in honor of "Veronica D. DeBlanc" to St Jude Childrens Research Hospital at https://www.stjude.org/ Cypress Funeral Home & Crematory, 206 West Lafayette St., Maurice, LA. 70555, (337) 740-3123, is in charge of Cremation arrangements.

The family of Veronica D. DeBlanc created this Life Tributes page to make it easy to share your memories.

Send flowers to the DeBlanc family.