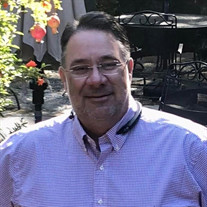 Youngsville - A Funeral Mass will be held on Friday, December 10, 2021 at 11:00 am at St. Joseph Catholic Church in Milton for Todd Jude Tauzin, age 54, who passed away peacefully at his residence on Saturday, December 4, 2021, surrounded by his family. Father William Schambough, pastor of St. Joseph Church in Milton, will officiate the services. Visitation will be held on Friday, December 10, 2021 from 10:00 AM until 11:00 am at St. Joseph Catholic Church. Todd Jude Tauzin was born on October 20, 1967 in Lafayette, Louisiana and he was a resident of Youngsville. Todd enjoyed life to the fullest with his family and many friends. He loved traveling and especially visiting Exuma, Bahamas with the love of his life. A devoted father and husband, he loved doting on his daughters and wife, and he was especially looking forward to to the birth of his first grandchild Gray Oliver, due in March. Todd was truly the epitome of the notion of working hard but playing hard as well. There was no denying that he was considered the "life of the party". His sense of humor, repertoire of jokes, and his hilarious antics left little doubt that when he walked into a room you were guaranteed to have good time. Those who knew him and loved, have been truly inspired by witnessing his valiant struggle over the last 11 months with courage and bravery, never once complaining. He will be dearly missed by his family and friends. Todd is survived by his living wife of 34 years, Monica Benton Tauzin of Youngsville; his children, Elise Monae' Tauzin, and Morgan Tauzin David' and her husband Andre; his siblings, Toni Dueitt (Scott), Vicki Strong (Tom), Terri Schwab (Greg), Tiffani LeMaire (Jerrod), and Jamie Tauzin; as well as a host of nieces and nephews. He was preceded in death by his parents, Wilfred Tauzin and Hallie Calais Tauzin; and his two nieces, Mia Dueitt, and Ralem Strong. The family would like to extend a heartfelt thank you to Dr. Elias Moussaly and the nurses and staff of the JD Moncus Cancer Ceneter, Dr. Julian Krawczyk with Oncologics, Dr. Benjamin Doga and staff, as well as the numerous friends who were by Todd's side throughout his illness offering their love and support. As well as a very special thank you to Todd's Angel on Earth, his youngest sister Jamie for her unwavering devotion to him and his care during the last 11 months. In lieu of flowers memorial donations may be made in memory of Todd Tauzin to "Hospice of Acadiana". Cypress Funeral Home & Crematory, 206 West Lafayette St., Maurice, LA. 70555, (337) 740-3123, is in charge of Cremation arrangements.

Youngsville - A Funeral Mass will be held on Friday, December 10, 2021 at 11:00 am at St. Joseph Catholic Church in Milton for Todd Jude Tauzin, age 54, who passed away peacefully at his residence on Saturday, December 4, 2021, surrounded by... View Obituary & Service Information

The family of Todd Jude Tauzin created this Life Tributes page to make it easy to share your memories.

A Funeral Mass will be held on Friday, December...

Send flowers to the Tauzin family.