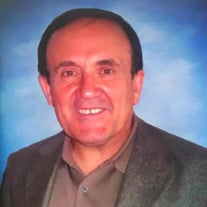 Lafayette - A Mass of Christian Burial will be held on Friday, December 17, 2021, at 1:00 PM at St. John’s Cathedral in Lafayette for Thomas Henry Hopkins, age 74, who passed away peacefully on Sunday, December 12, 2021 surrounded by his loved ones. Rev. Steven C. LeBlanc will conduct the funeral services. Musical Selections will be performed by Karen Broussard; Ave Maria, One Bread - One Body, Here I Am Lord, and Be Not Afraid. Gift Bearers will be Tom's grandchildren, Rilee Cormier, and Tanner Cormier. Visitation will be held on Friday, December 17, 2021 from 9:00 AM until 12:00 PM in the Cypress Funeral Home Chapel. Tom, known by his family and close friends as Tommy, lived for his athletic lifestyle. He was a successful athlete at home in Dublin, Ireland before accepting a scholarship to the University of Southwest Louisiana, known today as “ULL”. Tommy Hopkins went on to become a legend in Louisiana's running community. He made his mark very early in Acadiana as a distance runner for the “USL”. He immediately became an integral part of the “USL” Cross-Country team. Identified as "the Irishman" in the 1967 yearbook, he was a member of the team during its three consecutive years as the Gulf Coast Conference champions. He continued to improve his running skills while at the university placing 4th in the conference championship in 1966, and 2nd in the 1967 games. By 1968, as the team captain for the 14th Annual Gulf Coast Conference meet, Tommy set the pace and he captured first place over 25 conference rivals ensuring “USL” dominance over the conference for the 3rd consecutive year. In 1970, Tommy continued to astound the running community by setting a record in the distance medley and placing 1st in the “Three Mile Run”. His exceptional running abilities coupled with his easy going demeaner which he displayed during his years at “USL” made him an excellent coach and mentor for many future generations of runners in Southwest Louisiana. Aside from running Tommy also enjoyed the game of golf and in 1975, he won the Golf Championship at Muni. After college Tommy went on to work for many years as a Landman in the Oil & Gas industry. He looked forward to returning home to Ireland each year to visit with his family. Tommy will be dearly missed by his family and friends here in Louisiana and abroad. His memories will be cherished forever. Tommy is survived by his loving daughter, Anika Hopkins Cormier (Morris); his grandchildren, Rilee Cormier, and Tanner Cormier; his siblings, Nuala Johns (Bernard), Geraldine Raia, Emily Dowling (Michael), Marie Fleming (James), Desmond Hopkins (Marie), Catherine O’Byrne; as well as his twenty-two nieces and nephews, and many cousins. He was preceded in death by his parents, Thomas Hopkins and Anne Marie Hopkins; as well as his brother James Hopkins. Honored to serve as pallbearers: Morris Cormier, Russell McKay, Desmond O'Connor, Claude Revels, Manny Rachal, and Jim Gonsulin. Tanner Cormier will carry the Crucifix. Tom’s family would like to issue a special thank you to all of his very good friends that have reached out to the family and have continued to show their support for throughout this difficult time. Cypress Funeral Home & Crematory, 206 West Lafayette St., Maurice, LA. 70555, (337) 740-3123, is in charge of funeral arrangements.

Lafayette - A Mass of Christian Burial will be held on Friday, December 17, 2021, at 1:00 PM at St. John&#8217;s Cathedral in Lafayette for Thomas Henry Hopkins, age 74, who passed away peacefully on Sunday, December 12, 2021 surrounded by... View Obituary & Service Information

The family of Thomas H. Hopkins created this Life Tributes page to make it easy to share your memories.

A Mass of Christian Burial will be held on Friday,...

Send flowers to the Hopkins family.