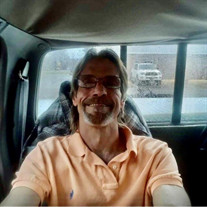 Rayne - Thad James Thomas, 54, passed away on Sunday, January 17, 2021 in Rayne, Louisiana. In accordance with Covid 19 restrictions an outdoor Memorial Service will be held a later date in St. Peter and Paul Catholic Cemetery in Scott. Thad was born on October 13, 1966 in Lafayette, Louisiana and he was a resident of Rayne. Thad is survived by his companion, Janet Thomas of Duson; his brothers, Byron Thomas of Scott and Shawn Thomas of Lafayette; his sister, Toby Lynn Thomas (Troy) of Carencro; his step brother, Rodney Aucoin; his nephews, Bryson Thomas, Brennan Thomas (Adrianna), Thomas James "TJ" Nugent, and Chris Thomas. He was preceded in death by his wife, Eunice Ann Thomas; his mother, Barbara Ann Navarre Thomas; his father, Ray Anderson Thomas, Sr.; his brother, Ray Anderson Thomas, Jr.; his sister, Christina Ann Thomas; and his nephew, Michael Anthony Thomas. Inurnment will take place in St. Peter and Paul Catholic Cemetery in Scott, Louisiana. The Thomas family would like to extend a special thanks to Heart of Hospice, Nurse Nichole Deville and a special friend Bradford Romero for the support that was provided to them during their time of need. Cypress Funeral Home & Crematory is in charge of arrangements.

The family of Thad James Thomas created this Life Tributes page to make it easy to share your memories.

Send flowers to the Thomas family.