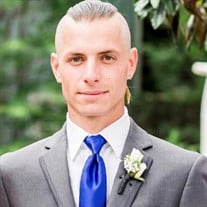 Stephen Aaron Casanova June 9, 1993 – July 13, 2020 Funeral Services will be held on Friday, July 17, 2020 at 12:00 PM in the Chapel of Cypress Funeral Home in Maurice for, Stephen Aaron Casanova, 27, who passed away on Monday, July 13, 2020 in Opelousas, Louisiana. Reverend Peter Johnston of Trinity Anglican Church will officiate the services. Visitation will be observed at Cypress Funeral Home on Friday, July 17, 2020 from 11:00 AM until 12:00 PM. In accordance with the Governor’s mandate, we ask that all visitors wear a mask and practice social distancing during the visitation and the service. Stephen was born on June 9, 1993 in Kharokova, near Donetsk, Ukraine and was a resident of South Louisiana. He was adopted from an orphanage in Ukraine along with his brother Robert. He was Veteran of U.S. Army and was stationed at Fort Lewis in Washington State. Stephen was an excellent mechanic having graduated from SLCC in the Aircraft Maintenance Program in May of 2018, after receiving an Automobile Mechanic Certification in 2015. Stephen was a kind and gentle spirit. He was always polite and helpful to strangers and was willing to assist anyone in need. The deep sorrow of his brother’s death in 2019 dominated his last days. We take solace in knowing that Stephen and Robert have been joyfully reunited once again in heaven. Stephen will be deeply missed by his family and friends. Stephen is survived by his father Mark S. Wilson and his wife Jennifer G. Wilson of Lafayette; his mother Jean C. Casanova of Opelousas; his grandparents, Billie Jo Casanova, of Opelousas and Edna Gotreaux of Lacassine; siblings, Erin C. Couvillion of Portland, OR; Adrienne Couvillion Barnhill of Lafayette; LA; John Fred Meyer III of Petal, MS; Allan J.B. Lanphier of Lafayette, LA; and Christopher J. Lanphier of Lafayette, LA; as well as several nieces, nephews, aunts, uncles. Stephen was preceded in death by his grandparents; Robert (Bob) Casanova, Oscar Ruberts Wilson, Jr., Elizabeth Lee Carter Wilson, and Joseph Gotreaux; and his siblings, Robert A. Wilson, Joseph B. Meyer, and Jessica L. Meyer. Memorial tribute Video https://www.tributeslides.com/tributes/show/YRTPKN2TT8TZKP7R Online obituary and guestbook may be viewed at www.CypressFunerals.com Cypress Funeral Home & Crematory, 206 West Lafayette St., Maurice, LA. 70555, 337-740-3123, is in charge of arrangements.

The family of Stephen Aaron Casanova created this Life Tributes page to make it easy to share your memories.

Send flowers to the Casanova family.