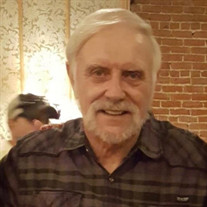 Erath – Ronald “Dale” Lyons, 71, passed away peacefully on Sunday, May 2, 2021 in at his residence in Erath surrounded by his family. Dale was born on November 24, 1949 in Kaplan and he was a lifelong resident of Vermilion parish. He worked throughout his life as a welder. He loved oldies music and he was a talented singer and guitar player. He was the type of man who was always willing to help those in need. Dale was a jack of all trades and was affectionately called “Mr. Fix it” by his children. Whether someone’s car needed maintenance or a sink needed fixing, Dale was always there to save the day. He enjoyed working with his hands, and was always building things and working on things. He was full of energy and strength and always managed to lead an active life. In his spare time, he enjoyed watching Sci-Fi movies, documentaries, and old westerns. He also enjoyed spending quite time at home, reading and researching. Occasionally, he liked to get out and have a good time. When he did, he was the life of the party and he enjoyed dancing with his wife and daughters. More than anything Dale was a family man; he loved his children and his family above all other things. He was also an animal lover and he had a special place in his heart for his pets. Dale was an honest man, and he was known to be blunt or “Tell it like it is”. You always knew where he stood or what he was thinking, but he had a big heart. Dale will be remembered as a man of faith who remained positive and fought the good fight in life. He will be dearly missed by all who knew him. Dale is survived by his children, Jared Lyons of Lake Charles, Beau Lyons and his wife Toni LaFountain of Erath, Ronnie Maynard of Crowley, Arianna Lyons of Lafayette, Brittany Sonnier and her husband Jason of Lafayette, James Eric Lyons of Abbeville, and Frank Duplantis of Abbeville; his grandchildren, Elijah Lyons and Koehn Lyons of Lake Charles; his sisters, Denise Leboeuf, Cheryl Dennis, Deborah Bertrand and her husband Steve, Pam Lyons, and Pat Helo and her husband Robert. He was preceded in death by his loving wife of 45 years, Melody LaSalle Lyons; his parents, Ron Ray “Pee Wee” Lyons and Dolores Hargrave Toups; and his sister, Charlotte Toups Milton. Dale will be laid to rest with his wife in Our Lady of Lourdes Catholic Cemetery in Erath, Louisiana. Online obituary and guestbook may be viewed at www.CypressFunerals.Com Cypress Funeral Home & Crematory, 206 West Lafayette St., Maurice, LA. 70555, 337-740-3123, is in charge of arrangements.

The family of Ronald "Dale" Lyons created this Life Tributes page to make it easy to share your memories.

Send flowers to the Lyons family.