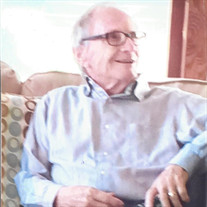 Abbeville - Robert Lovelace Hebert 1931 - 2021 Robert passed away on Sunday, August 8, 2021 at 90 years of age after a long battle with complications from diabetes. He was born in rural Abbeville on July 17, 1931, and lived in Abbeville for most of his long life. Robert graduated from Abbeville High in 1950 and received his degree in psychology in 1959. He was an Army veteran who served his country during the Korean War as an explosive-ordinance specialist. He retired from the Louisiana Department of Labor in 1986. He held various positions in the Department and ended his 25-year career as a Management Analyst at the Department’s headquarters in Baton Rouge, Louisiana. After he retired, he worked in other professions, but his search for the right job ended when he and his wife, Beverly, opened a custom-framing shop, which they operated for 20 years. Their business fit his ideal because it allowed them to work side-by-side. In midlife, Bobby and Beverly discovered a love for travel abroad. They visited many countries but felt happiest in France. They returned many times and always felt at home there. To honor Robert’s wishes, he will be cremated, and no formal services will he held. In lieu of a traditional service, friends and family will join together at the Hebert home where Beverly and his daughters will host a celebration-of-life gathering, date to be determined. Robert’s ashes will be kept in an urn until his wife passes. Their ashes will be mixed, and half will be placed in their plot in the Old Catholic Cemetery behind St. Mary Magdalen Church in Abbeville, and the remaining ashes will be spread both in Paris and the French countryside. Robert leaves behind his wife, Beverly Hebert, and their daughter, Andrea Leah Hebert of Baton Rouge (partner Rodrigo Valverde). He also leaves behind his three stepdaughters who he thought of as his own: Angelique Ward (husband, Jim Ward) of Kingwood, Texas; Rachael Novak (husband, Charlie Novak) of Abbeville, Louisiana; and Camille Boudreaux of League City, Texas. Rachael Felts (husband, Blake Felts) of Lake Charles, Louisiana, and Caroline Ward of Masan, South Korea, are his step-granddaughters. Carter D. Cole of League City, Texas, and Hayden Neveaux of Lafayette, Louisiana, are his step-grandsons. Step great-grandchildren are Danny J. Meche and Blaire Felts. Robert has two half-sisters, Patsy di Benedetto and Linda Cook, and one half-brother, Lovelis Hebert, Jr. Predeceasing Robert was his stepson, Julian Boudreaux; his parents, Lovelis Hebert and Emertile Hebert; a brother, Vernon Hebert; and an infant brother, Howard Hebert. Also predeceasing him were two aunts, Andrea Hebert and Mathilde Hebert, and his in-laws, John Octave Desormeaux and Hazel Dyson Desormeaux. Robert was a member of the Confrerie d’Abbeville; the Sons of the American Revolution, Attakapas Chapter; Sons of Confederate Veterans/Jefferson Davis, Camp 474; and the Abbeville Masonic Lodge #192. The family extends gratitude to the compassionate staff from Hospice of Acadiana. For those desiring to make a memorial contribution in Robert’s name, please do so to this organization. Cypress Funeral Home & Crematory, 206 West Lafayette St., Maurice, LA. 70555, (337) 740-3123, is in charge of Cremation arrangements.

Abbeville - Robert Lovelace Hebert 1931 - 2021 Robert passed away on Sunday, August 8, 2021 at 90 years of age after a long battle with complications from diabetes. He was born in rural Abbeville on July 17, 1931, and lived in Abbeville for... View Obituary & Service Information

The family of Robert L Hebert created this Life Tributes page to make it easy to share your memories.