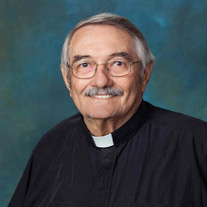 Abbeville - A Mass of Christian Burial will be held on Saturday February 5, 2022 at 10:30 AM at Our Lady of Lourdes Catholic Church in Erath, Louisiana for the Reverend Richard Dale Broussard, 82, who passed away on Thursday, January 27, 2022. The Most Reverend J. Douglas Deshotel, Bishop of the Diocese of Lafayette, will be the Celebrant of the Funeral Mass, and Deacon Gerald Bourg will serve as homilist. Father Broussard served as a Roman Catholic priest for 21 years in the Diocese of Lafayette. He attended Seminary at Sacred Heart in Hales Corner, Wisconsin. He was Ordained on July 15, 2000, at St. John's Cathedral in Lafayette. His was first assigned to St. Genevieve in Lafayette on July 24, 2000. On May 31, 2002, he was transferred to Our Lady of Perpetual Help in New Iberia. On June 10, 2003 he received his first assignment as Pastor, at St. Peter in Pine Prairie, Louisiana. He continued in ministry after submitting for retirement in 2014, serving at St. John the Baptist in Lyons Point. On September 30, 2017, he was assigned temporary administration at St. Helena, Louisa. On November 20, 2020, he officially retired. Father Broussard served as the state Chaplin of the Knights of Columbus, December 12, 2003. He also served on the Priest welfare committee from January 1, 2006 through January 1, 2014. Father Broussard was born in 1939 in Abbeville, and he attended Mt. Carmel Elementary School. He was a Graduate of Abbeville High School class of 1958. He attended seminary after high school, but discerned out of a religious vocation. He was a professional photographer for a time, then went to work in the oilfield. He began engaging in religious pilgrimages with his mother, and upon her death, he discerned to return to the seminary. He made many trips to the most popular Catholic Shrines including, Lourdes, and Fatima, saying Mass at both sacred sites. In his spare time he was an avid sportsman who enjoyed both hunting and fishing. He was also an accomplished fly fisherman who tied his own flies, as well as a black powder rifleman. He enjoyed being a ham radio operator, and he erected antenna towers in at least one of his church parishes. Father Broussard was an active member of the Knights of Columbus; as well as active in the Cursillo movement. He touched many lives and he will be dearly missed by his family and friends. Eternal rest grant onto him O Lord, and may perpetual light shine upon him, may he rest in peace. May his soul, and the souls of all the faithful departed, through the mercy of God, rest in peace. Father Broussard is survived by his brothers, Marion Broussard and his wife Patricia of Montgomery, Texas, and Keith Broussard and his wife Tiona of Abbeville, Louisiana. He was preceded in death by his father Laodis Broussard and his mother Monique Broussard; as well as his brother, Shelley Paul Broussard. Pall Bearers will be Aubrey Curry, Wilson Judice, Todd Hebert, Clint Judice, Chad Judice, Chuck Autin, and Deacon Ricky Picard. Interment will be held at St. Paul Cemetery in Abbeville, Louisiana. A reception will held in "Pope John Paul II Church Parish Hall" next door to the Church, beginning after the end of the first Mass and continuing until 5:00 PM. Cypress Funeral Home & Crematory, 206 West Lafayette St., Maurice, LA. 70555, (337) 740-3123, is in charge of Funeral arrangements.

Abbeville - A Mass of Christian Burial will be held on Saturday February 5, 2022 at 10:30 AM at Our Lady of Lourdes Catholic Church in Erath, Louisiana for the Reverend Richard Dale Broussard, 82, who passed away on Thursday, January 27, 2022. The... View Obituary & Service Information

The family of Reverend Richard Dale Broussard created this Life Tributes page to make it easy to share your memories.

A Mass of Christian Burial will be held on Saturday...