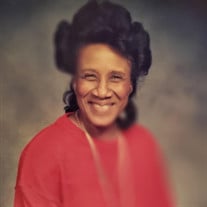 Rayne - Mary Lou Bertha Yokum, 82, passed away on Wednesday, August 25, 2021 in Crowley, Louisiana.   Mary was born in Branch, LA on October 7th, 1938. Due to complications at birth, Mary’s mother did not make it through childbirth and at 3 days old, she was adopted to the late William and Sarah Yokum. Mary was a woman of strength and resilience. No matter what task was at hand, she did her best to ensure that it was done to perfection. Mary often spoke fondly of her memories of growing up in Branch working in her family's cotton fields. From there, the family would eventually move to Rayne, Louisiana, where, her mother, Sarah taught school for many years. The Yokum family made a church home to Starlight Baptist Church where Mary’s mother, Sarah was a missionary, keeping them both involved advocates of the Baptist community. Mary eventually graduated in Rayne and from there she went on to teach at Rayne Head Start, for over 27 years. Church life and education were two very important staples in the Yokum household. Mary later retired from teaching and became a caretaker for those at need. She spent her remaining years spending time with her grandkids, neighbors and close friends. She will be dearly missed by all who knew her. Mary is survived by her loving daughter, Lois Mouton; her grandchildren, Bianca Mouton, Brittney Young, and Blair Young; her great grandchildren, Syre Mouton, Saylr Mouton, Shye Price, Raleigh Young, Lyric Young, Belize Francis, and Quentin Young; her siblings, Esther Mae Belizaire (Lake Charles, LA) and James Hackett, Jr(New York, NY); and her great grand puppy, Mary Jane Mouton.   Mary was preceded in death by her parents, William and Sarah Yokum; her former spouse, Aros Mouton; and her brother, Sidney Ardoin. The family would like to extend a special thanks to Ochsner's Acadia General.   Cypress Funeral Home & Crematory, 206 West Lafayette St., Maurice, LA. 70555, (337) 740-3123, is in charge of arrangements.

Rayne - Mary Lou Bertha Yokum, 82, passed away on Wednesday, August 25, 2021 in Crowley, Louisiana.   Mary was born in Branch, LA on October 7th, 1938. Due to complications at birth, Mary&#8217;s mother did not make it through childbirth and... View Obituary & Service Information

The family of Mary Lou Bertha Yokum created this Life Tributes page to make it easy to share your memories.

Send flowers to the Yokum family.