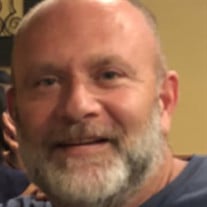 Layne Richard A Memorial Service will be held on Saturday, June 20th, 2020, at 10:00 am at Submerge Family Church, 201 Four Park Rd., Lafayette, LA. 70507 for, Layne Richard, 51, who passed away on Sunday, June 7th in Lafayette. Layne was born on July 3rd, 1968 in Rayne, Louisiana. He will be remembered as a loving husband, father and encourager, who was always willing to help anyone in need. Layne enjoyed volunteering with Grace Hospice. He always made those around him laugh. More than anything Layne was a man of God who loved to worship the Lord. Layne is survived by his loving wife, Linda Richard; his children, Damon Richard, Jordan Richard, Collin Richard and Allyssa Deshotel; his mother, Jeri McDaniel LeJune; Siblings, Stephanie Richard Jefferys and Kevin Richard. He was preceded in death by his father, Lesley E. Richard. Online obituary and guestbook may be viewed at www.CypressFunerals.com Cypress Funeral Home & Crematory, 206 West Lafayette St., Maurice, LA. 70555, 337-740-3123, is in charge of arrangements.

The family of Layne Richard created this Life Tributes page to make it easy to share your memories.

A Memorial Service will be held on Saturday, June...

Send flowers to the Richard family.