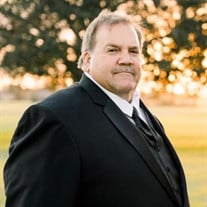 Maurice - Joseph “Joey” D. Broussard, age 56, passed away peacefully on Sunday, May 8, 2022, at his residence in Maurice, with his family by his side. Joseph D. Broussard was born on July 18, 1965, in Morgan City and he was a long-time resident of Vermilion Parish. He was a graduate of North Vermillion High School Class of 1984. After high school, he went on to work in the oilfield where he spent many years as a production operator. Joseph was proud of his Cajun heritage, he enjoyed listening to Cajun French music, dancing, and eating Cajun food. More than anything Joseph was a loving father, and grandfather. He adored his children and grandchildren and cherished the time he spent with them. He will be dearly missed by his family and friends. Joseph is survived by the mother of his children, Tina Landry Broussard of Delcambre; his children, Tiffany Faulk (Jonathan) of Maurice, Lauren Clark (Tommy) of Maurice, Matthew Broussard (Kasha) of Maurice, Regan Tutor (Kyle) of St. Francisville, Jonathon Broussard (Brittany) of Delcambre, Nicholas Broussard (Maisie) of Maurice, and Allison Broussard of Delcambre; his grandchildren, Kennedi, Elise, Jachson, Tate, Katherine, Lillie, Nathan, Ellie, Beau, Colt, Luke, Gracie, Austin, Evie, and Brooks; his parents, James C. Broussard Sr. and Joycie Lege Broussard; his siblings, Jackie Broussard (Keith) of Maurice, Janine Hebert (Randy) of Maurice, Janetta Touchet (Kelly) of Lafayette; his Godchild, Amy Broussard of Maurice; as well as a host of beloved nieces and nephews. He was preceded in death by his brother, Jerod Broussard; and his grandparents, Mr. and Mrs. Claude Broussard, and Mr. and Mrs. Percy Lege. The Broussard family wishes to offer a heartfelt thank you to Dr. Matthew Boudreaux, Dr. Philippe Prouet II, and the Nurses, Doctors, and Staff at Amedisys Hospice for the kindness, care, and compassion they offered Joseph during his time of need. The Broussard family also wishes to extend a special thank you to his employers Bobby Gunn, Joetta Gunn, as well as Charles Abshire at Prosper Operations. Cypress Funeral Home & Crematory, 206 West Lafayette St., Maurice, LA. 70555, 337-740-3123, is in charge of Cremation arrangements.

The family of Joseph D. Broussard created this Life Tributes page to make it easy to share your memories.

Send flowers to the Broussard family.