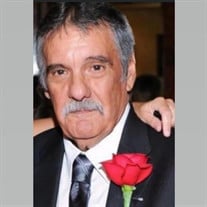 Erath - Funeral Services will be held at 3:00 PM on Wednesday, June 9, 2021 at Cypress Funeral Home in Maurice for Jimmy Earl Ward, 81, who passed away on Saturday, June 5, 2021 at his residence in Erath, surrounded by his family. Visitation will be observed at Cypress Funeral Home on Wednesday, June 9, 2021 from 10:00 am until 8:00 pm. Deacon Keith Duhon will officiate. Jimmy was born on September 23, 1939 in Bassfield, Mississippi and he was a longtime resident of Vermillion Parish. After highschool Jimmy enlisted in the Army National Guard where he continued to serve for many years. He was employed by Conoco Phillips and worked as a consultant in the oil and gas industry. He was able to travel and work all over the world throughout his career. Jimmy will be remembered as a loving husband, father, and grandfather. He will be dearly missed by all who knew him. Jimmy is survived by his wife, Roslyn Delahoussaye Ward; his children, Richard Ward (Dana) of Missouri, Lynn Landry (Kevin) of Youngsville, Robin Ward of Erath, Keshia Etheridge of Erath, and Ryan Bares (Laura) of Erath; his grandchildren, Brennon, Cody, Kourtney, Jace, Cabot, Drake, Maylei, Tyler, Collin, and Addyson; his great grandchildren, Elizabeth and Dorian; his sister, Ann Wyatt of Jackson, Mississippi; his brothers, Tommy Ward of Houston, Texas and Roger Ward (Pam) of Bassfield, Mississippi. He was proceeded in death by his parents, William Thomas Ward and Gladys Bryant Ward; the mother of his children, Curlie Modisett Ward; and his brother-in-law, Joe Wyatt. The family wishes to extend a heartfelt thank you to the Nurses, Doctors and staff at Amedisys Hospice, especially his Nurse's Aide Cici, for all of the care and compassion they showed Jimmy during his time of need. Online obituary and guestbook may be viewed at www.CypressFunerals.Com Cypress Funeral Home & Crematory, 206 West Lafayette St., Maurice, LA. 70555, 337-740-3123, is in charge of arrangements.

Erath - Funeral Services will be held at 3:00 PM on Wednesday, June 9, 2021 at Cypress Funeral Home in Maurice for Jimmy Earl Ward, 81, who passed away on Saturday, June 5, 2021 at his residence in Erath, surrounded by his family. Visitation... View Obituary & Service Information

The family of Jimmy Earl Ward created this Life Tributes page to make it easy to share your memories.

Funeral Services will be held at 3:00 PM on Wednesday,...

Send flowers to the Ward family.