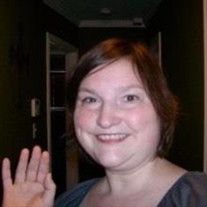 Abbeville - Janet "Kelly" Touchet, age 54, passed away on Monday, December 13, 2021 in Abbeville, Louisiana. In keeping with Kelly's wishes, a private memorial service will be held by her family at later date. Pastor Preston Riley of First Baptist Church of Abbeville will offer a message of hope and healing as well as prayers for the family. Janet Kelly Touchet was born on December 19, 1966 in Abbeville, Louisiana and she was a life long resident of Lafayette. After high school Kelly continued her education with a career in nursing. She worked for many years at Lafayette General Medical Center in the "NICU". Kelly was a natural caretaker and she adored caring for her little patients and those in need. She will be remembered as a beloved daughter, and a cherished "Nanny" to her nieces and nephews. Even in her time away from work Kelly enjoyed giving of herself and her time, she went on mission trips to Mexico to help others who were in need. She had a large outreach of friends from all over the world with who she kept in touch with weekly thru emails and various online platforms. Kelly was also an animal lover. She adored both dogs and cats, and for many years she was known for raising beautiful "Yorkie Puppies". Kelly will be dearly missed by her family and friends. Her memories will be cherished forever. Kelly is survived by her parents, Edward Touchet (Janice) of Abbeville, and Karen Faul (Dwight) of Abbeville; her sisters, Ann Marteaux (Olivier) of California, and Tania Hays (Robert) of Lafayette; her sister in law, Jodie Touchet; as well as a host of nieces and nephews; and her precious cat "Bean". She was preceded in death by her sister, Nissa Touchet; her brother, Hampton Touchet; as well as her paternal and maternal grandparents. The family would like to offer a heart felt thank you to "Chief" William "Bill" Spearman of the Abbeville City Police Department for his comforting words and compassion that he provided them on the morning that Kelly passed; as well a special thank you to the Doctors, Nurses and Staff of Ochsner University Hospital & Clinics in Lafayette for all of the excellent care and medical treatment they provided Kelly throughout her illness. In lieu of flowers memorial contributions may be made in Memory of "Kelly Touchet" to The American Heart Association https://www.heart.org/?form=donate, or to The American Diabetes Association https://www.diabetes.org/?form=Donate. Kelly will be laid to rest with her family in St. Paul Catholic Cemetery in Abbeville. Cypress Funeral Home & Crematory, 206 West Lafayette St., Maurice, LA. 70555, (337) 740-3123, is in charge of Cremation arrangements.

Abbeville - Janet "Kelly" Touchet, age 54, passed away on Monday, December 13, 2021 in Abbeville, Louisiana. In keeping with Kelly's wishes, a private memorial service will be held by her family at later date. Pastor Preston Riley of First... View Obituary & Service Information

The family of Janet "Kelly" Touchet created this Life Tributes page to make it easy to share your memories.

Send flowers to the Touchet family.