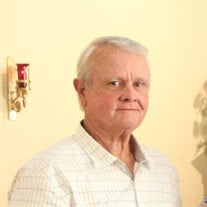 Maurice - A Mass of Christian Burial will be held on Thursday, August 19, 2021 at 11:00 AM at St. Alphonsus Catholic Church in Maurice for George B. Gardiner, 77, who passed away on Monday, August 16, 2021 in Lafayette, Louisiana. Reverend William Schambough, Pastor of St. Joseph Catholic Church, will conduct the funeral services. Assisting in the funeral Mass will be Deacon Keith Duhon. The family requests that visitation be observed at Cypress Funeral Home in Maurice on Wednesday, August 18, 2021 from 4:00 PM to 8:00 PM and will continue on Thursday, August 19, 2021 from 8:30 AM until time of services. A recitation of the Holy Rosary will be held during the visitation on Wednesday August 18, 2021 at 7:00 PM. Entombment will be held in the Mausoleum of St. Alphonsus Catholic Cemetery. George B. Gardiner was born on April 16, 1944 in Lafayette, Louisiana and he was a resident of Maurice for the last 46 years. He graduated from Teurlings Catholic High School – Class of 1962. After graduation George went on to serve his country in the United States Army Reserves. He was the founder of Central Office Supplies in Lafayette and after 50 years the business still remains open and operated by the family. After his retirement George enjoyed farming rice and crawfish. In his spare time he enjoyed gardening, cooking, hunting and fishing. George was a dear friend to many, especially to his high school classmates “Class of 1962” whom he remained in close contact throughout his years. More than anything George will be remembered as a loving husband, father and grandfather. His memories will be cherished and he will be dearly missed by all who knew him. George is survived by his loving wife of 56 years, June Robert Gardiner; his children, Lisa Duhon and her husband Deacon Keith of Milton, Troy Gardiner and his wife Stacy of Lafayette, and Corey Gardiner of Maurice; his grandchildren, Candice Gardiner, Spencer Duhon and his wife Madi, Victoria Duhon, Mackenzie Gardiner, Mallie Gardiner, Annison Gardiner, and Paxton Gardiner; his great-grandchildren, Remi Duhon, and Lillian Duhon; his siblings, John Gardiner and his wife Debi of Baton Rouge, Charlie Gardiner of Scott, Mary Catharine Gardiner of Arnaudvile, Lula Segura of Lafayette, Sheila Campbell and her husband Gale of Lafayette, and James Christopher Gardiner of Lafayette. He was preceded in death by his parents, George Victor Gardiner, MD and Catherine Bunnell Gardiner; his siblings, Martha Ann Gardiner, Terry Gardiner, and Michael Gardiner; as well as his in-laws, Luke Robert and Bertha Bower Robert. Pallbearers will be Troy Gardiner, Corey Gardiner, Paxton Gardiner, Spencer Duhon, Troy Meaux and Tony Taylor. Honorary Pallbearers will be John Gardiner, Charlie Gardiner, James Christopher Gardiner, and the Teurlings Catholic High School Class of 1962. In lieu of flowers memorial donations may be made in honor of George B. Gardiner to “St. Joseph Abbey” at Saint Joseph Abbey, 75376 River Rd, Saint Benedict, LA. 70457 or online at https://www.saintjosephabbey.com/donate The family wishes to extend a heartfelt thank you to Dr. Tyler Perrin Bellello, Dr. Steven Saccaro, Dr. Juan Perez and Dr. Alan Appley; as well as the Doctors, Nurses and staff of St. Joseph Carpenter House, especially Kathleen, Cody, Genevieve and Brenda for all of the care and compassion they provided George and his family during their deepest time of need. Cypress Funeral Home & Crematory, 206 West Lafayette St., Maurice, LA. 70555, (337) 740-3123, is in charge of funeral arrangements.

Maurice - A Mass of Christian Burial will be held on Thursday, August 19, 2021 at 11:00 AM at St. Alphonsus Catholic Church in Maurice for George B. Gardiner, 77, who passed away on Monday, August 16, 2021 in Lafayette, Louisiana. Reverend... View Obituary & Service Information

The family of George B. Gardiner created this Life Tributes page to make it easy to share your memories.

A Mass of Christian Burial will be held on Thursday,...

Send flowers to the Gardiner family.