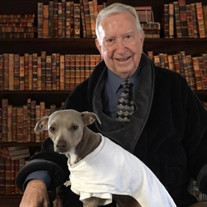 Maurice - Frank Kennedy Warner, Jr., 84, passed away on Thursday, May 20, 2021 at his residence in Maurice, Louisiana. Frank was born on June 19, 1936 in Tallulah, Louisiana. Frank was very generous, kind, affectionate and patient, someone who would always look for the good in others. He loved telling stories of his childhood and the many places he lived. He left college to join the Airforce because of his love of airplanes. While still in the military he married his first wife, Peggy Goodson. Frank was stationed in Tripoli, Libya for a few years but was anxious to get back home to his new wife. He left the military, January 1962 with an Honorable Discharge. He and Peggy started a family and had 2 daughters, Toni and Terri. While raising a family Frank decided to finish his college education and graduated with a Bachelor degree in Accounting. Frank worked for many CPA's and other businesses over the years but always cherished his time working for his best friend Randy Rankin. After working for Randy for many years he ventured out on his own and started his own accounting business. Sadly, not long after he became a widow and single Dad. He met his second wife Debbie Broussard Vice a few years later and adopted her daughter Melanie. Frank and Debbie worked together for 32 years in their accounting business until retiring and moving closer to family. Although Frank's work consumed a lot of his time, his greatest joy was studying God's Word and then sharing what he learned to anyone that would listen. His love for his God Jehovah moved him to dedicate his life to Him on July 5, 1974. He was one of Jehovah's Witnesses for 47 years. One thing he was especially fond of was volunteering his time-sharing Bible truths to those in prison. Frank spent his last days enjoying the peacefulness of the country, visiting with family and spending time with his loyal rat terrier Benny. Frank is survived by his loving wife, Debbie Broussard Vice Warner; his children, Terri Robertson (Jon), and Melanie Warner; his stepchildren, Clint Vice (Andrea), Jennifer Henderson (Terry) and Angela LeBouef (Scott); his grandchildren, Draven Vice, Makayla Vice, Chelsey Henderson, Ty Henderson, Lexie Robinson and Emma LeBouef; and his great grandchildren; Iris Dickerson and Ivy Henderson. He was preceded in death by his parents, Frank K Warner, Sr. and Viva Elliott; his sister, Patricia Warner; his brothers, Jerry Warner and Rodney Warner; his daughter, Toni Warner; and his first wife, Peggy Goodson Warner. A heart felt thank you to my sweet and loving family for all the hands-on help, providing meals and always being by our side when we really needed support. Would also like to give thanks to Compassus Care who did their best to make Frank comfortable. We love you, Debbie and Melanie. Online obituary and guestbook may be viewed at www.CypressFunerals.Com Cypress Funeral Home & Crematory, 206 West Lafayette St., Maurice, LA. 70555, 337-740-3123, is in charge of arrangements.

The family of Frank Kennedy Warner Jr. created this Life Tributes page to make it easy to share your memories.

Send flowers to the Warner family.