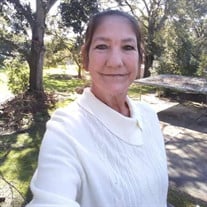 Abbeville - Florence "Bebe" Ann Viator, age 59, passed away on Friday, December 17, 2021 in Lafayette, Louisiana. A Private Memorial Service will be held at a later date. Florence was born on December 12, 1962 in Franklin, Louisiana and she was a resident of Erath. She will be remembered as a Mother, Grandmother, Daughter, Sister, Aunt, Cousin & a Dear Friend to many. She had a strong work ethic, and worked as a cashier the majority of her career. She was always available to help others or lend an ear to anyone who needed her. More than anything Florence was a loving mother and grandmother, her children and grandchildren meant the world to her. In her spare time she enjoyed swimming, fishing, eating seafood and having fun. Florence lived her life to the fullest, and there was never a dull moment when you were around her. She will be dearly missed by her family and friends. Florence is survived by her children, Rachel Segura of Inola Oklahoma, Laura Broussard of Erath, Jagger Broussard of Abbeville, and Megan Broussard of New Iberia; her grandchildren, Kiara Waguespack, Ronald Bourque Jr., Cameron Broussard, Tamora Wardlaw, Nadiyah Wardlaw, Izayiah Wardlaw, Dakota Broussard; siblings, Debra Smith of Livingston, Melissa Patty of Franklin, Whitney Bourque Jr. of Franklin, and Charles Bourque Sr. of Franklin; as well as a host of nieces, nephews, and cousins. She was preceded in death by her parents, Lawless Waguespack & Florence Bourque; as well as her grandparents and her aunts and uncles. The family wishes to extend a special thank you to the Nurses, Doctors and Staff of Lafayette General Medical Center, and St. Joseph's Carpenter House Hospice; as well as Red Bison. Cypress Funeral Home & Crematory, 206 West Lafayette St., Maurice, LA. 70555, (337) 740-3123, is in charge of Cremation arrangements.

Abbeville - Florence "Bebe" Ann Viator, age 59, passed away on Friday, December 17, 2021 in Lafayette, Louisiana. A Private Memorial Service will be held at a later date. Florence was born on December 12, 1962 in Franklin, Louisiana and... View Obituary & Service Information

The family of Florence "Bebe" Ann Viator created this Life Tributes page to make it easy to share your memories.

Send flowers to the Viator family.