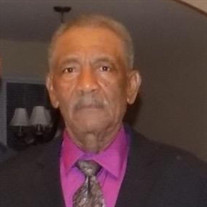 Abbeville - Eddie Jordan, Jr. departed on October 10, 2021 at his home in Abbeville, Louisiana. He was born on September 17, 1930 in Abbeville, Louisiana. He is survived by his wife, Lois Petry Jordan, whom he married on December 21, 1957. He has 6 children: Karen (Willie), Lyle (Rachel), Kimberly, Cedric (Brenda), Cheryl, and Kim (Lew) and 12 grandchildren: Raymond, Kara, Holly, April, Jaymie, Bryce, Jordan, Chelsea, Haley, Taylor, Gabrielle, and Sydney. He also had 14 great grands and a loving host of nieces and nephews. He is also survived by his baby sister, Janice Myles. He was preceded in death by his parents, Ruth and Eddie Jordan, siblings Luell, Ruth, Marjorie, Leonard, Willa Mae, and Leo. Eddie Boy, which is what he was lovingly referred to by all who knew him, was loved by everyone, and he loved everyone he met. He had a huge heart for children, especially his own kids and grandkids. He was an outdoorsman, spending very little time in the house during the day. He loved his Old Milwaukee beer. Anyone who knew him, knew that he loved to go fishing and trawling. He also had a knack for gardening, But, his gardening wasn’t the typical gardening one would think of; he enjoyed growing corn and okra, and was very good at it. He was a member of the Army of the United States and served in Korea during the Korean Conflict and separated as the rank of Corporal and was honorably discharged. He lived a stress free life and was rarely angered. In fact, he was a comedian, and had jokes about everything. When at home, Eddie Boy enjoyed his westerns, Judge Judy, tennis and football. He also enjoyed cooking, with fish being his favorite dish. Even though he didn’t talk about his faith, he was faith filled. All the way until about 2 weeks prior to his passing, he ended each day by getting on his knees and praying before bedtime. The Jordan Family would like to acknowledge all who came in to help Eddie Boy at his most difficult moments. Special thanks to Bria Fusilier, Hospice of Acadiana and all family and friends who rallied around him to lift his spirits. Special thanks to everyone for the many phone calls, cards, food, drinks, gifts and prayers. The graveside memorial will take place on Saturday, October 16, 2021 at 1:00 pm St. Paul Cemetery (mausoleum) 515 Jacqueline Street Abbeville, LA 70510. Cypress Funeral Home & Crematory, 206 West Lafayette St., Maurice, LA. 70555, (337) 740-3123, is in charge of Cremation arrangements.

The family of Eddie N. Jordan Jr. created this Life Tributes page to make it easy to share your memories.