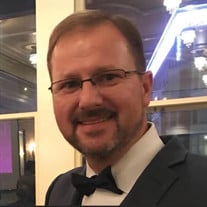 Maurice- A Mass of Christian Burial will be held on Saturday, March 6, 2021 at 1:00 PM in St. Alphonsus Catholic Church in Maurice, for David Reed Hardy, age 52, who passed away on Thursday, March 4, 2021 at his residence in Maurice surrounded by his family and friends. Visitation will be observed on Friday, March 5, 2021 from 3:00 PM until 9:00 PM at Cypress Funeral Home in Maurice. Visitation will continue on Saturday, March 6, 2021 at 9:00 AM and continue until time of services. A Rosary will be recited on Friday, March 5, 2021 at 7:00 PM by Deacon Bill Vincent. Reverend Paul Bienvenu, Pastor of St. Alphonsus in Maurice, will conduct the funeral services. David Reed Hardy was born in Kaplan, LA on May 18, 1968 and he was a resident of Maurice. During his childhood years he lived in Mont Belvieu Texas; Silesia Montana, and Abbeville Louisiana. He was a graduate of Abbeville Highschool. David spent his entire career working in law enforcement. He retired as a Lieutenant after 30 years with the Abbeville Police Department. His work was his passion, and he was dedicated to serving his community and protecting lives. He will be remembered by his fellow officers as a mentor, and as exemplary model of a Law Enforcement Professional. Away from work David was a loving husband, father, brother and grandparent. He was a die-hard “Dallas Cowboys Fan”. His family and friends will remember him as a kind, loving and generous man. Even though David didn’t always know what to do, he always did something. His true happy place was “The Lake”, his Lake House in Lake Conroe, Texas which is commonly known as “CAMP DAVID”, and where many wonderful memories were made. He will be dearly missed by all who knew him, and his memories will be cherished forever. In the words of his wife Kelly “To Know David was To Love Him”. David is survived by his wife, Kelly Broussard Hardy of Maurice; his children, Halle Hardy of Maurice, Chase Hardy (Jenna) of Lafayette, Layne Hardy of Chicago, Jared Langley of Lafayette, and Ethan Langley of Maurice; his grandchildren, Grayson Hardy and Sophia Chauvin; his siblings, Mike Hardy (Janise) of Abbeville, Chris Hardy (Kim) of Abbeville, Tony Hardy of Abbeville, Tim Hardy (Robin) of Prosper, TX., and Pat Hardy (Liz) of Erath; his step mother Neva Hardy of Abbeville; as well as a host of nieces and nephews. He was preceded in death by his parents, Minos J. Hardy and Ruby Trahan; his brother, John Mark “Dooley” Hardy; his sister-in-law, Trudy Hardy; his niece, Trisha Hardy; his nephew, Joshua Hardy; and his stepbrother, Eddie Meyers. Pallbearers will be Chase Hardy, Layne Hardy, Jared Langley, Ethan Langley, David Todd Hebert and Mike Hardy. Honorary Pallbearers will be Chris Hardy, Tony Hardy, Tim Hardy and Pat Hardy. Memorial contributions can be made in Mr. David Hardy’s name to St. Jude’s Children’s Research, 50 St. Jude Place, Memphis, TN 38105, https://www.stjude.org, and to MD Anderson Cancer Center in Houston, TX, https://gifts.mdanderson.org A heartfelt appreciation is extended by the Hardy family to Dr. Molly Thomas, Dr. Kanwal Raghav and to Dr. Filip Janku; along with their nurses and staff for their kindness and compassion given to David and his family during their time of need. He will be laid to rest in the Mausoleum of St. Alphonsus Catholic Cemetery, which David affectionately called his "Penthouse Suite". Online obituary and guestbook may be viewed at www.CypressFunerals.Com Cypress Funeral Home & Crematory, 206 West Lafayette St., Maurice, LA. 70555, 337-740-3123, is in charge of arrangements.

Maurice- A Mass of Christian Burial will be held on Saturday, March 6, 2021 at 1:00 PM in St. Alphonsus Catholic Church in Maurice, for David Reed Hardy, age 52, who passed away on Thursday, March 4, 2021 at his residence in Maurice surrounded... View Obituary & Service Information

The family of David Reed Hardy created this Life Tributes page to make it easy to share your memories.

A Mass of Christian Burial will be held on Saturday,...

Send flowers to the Hardy family.