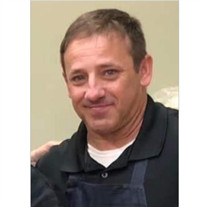 Maurice - A Mass of Christian Burial will be held on Saturday, December 11, 2021 at 11:00 AM at St. Alphonsus Catholic Church in Maurice for Chad Wayne Trahan, age 53, who passed away on Saturday, December 4, 2021 in Jennings, Louisiana. Fr. Billy Massie will officiate the Mass. Visitation will be held on Saturday, December 11, 2021 from 9:00 AM until 11:00 AM at St. Alphonsus Catholic Church in Maurice. Chad Wayne Trahan was born on June 23, 1968 in Abbeville, Louisiana and he was a life long resident of Vermilion Parish. He was a graduate of North Vermilion High School Class of 1986. He was an avid sports fan and he enjoyed watching College and Pro Football, as well as Horse Racing. More than anything Chad was a family man, he cherished the time he spent with his family and he loved having family gatherings. Chad had a great sense of humor, and always knew how to make others laugh. He will remembered as a kind, loving and generous man who was always there if you needed him. Chad will be dearly missed by his family and friends. Chad is Survived by his significant other, Sarah Guillory and her children Saje, Sabur and Searrah; his parents, Ronnie Trahan (Connie) of Abbeville, and Janis Bergeron Dubois of Meaux; his siblings, Shannon "Sam" Trahan (Sue Tart) of Lafayette, Kelli D. Rodrigue (Michael) of Conroe Texas, Ashley Dubois of Meaux, Elliot "Bud" Dubois (Katie) of Meaux, and Trisha Manceaux (Kevin) of Maurice; he is further survived by his God Children, Ross Trahan, Cooper Dubois, and Taylor LaViolette; along with a host of nieces and nephews. He was preceded in death by his paternal and maternal grandparents; his Godchild, Jett Sellers; his cousins Craig Bergeron, and Ryan Dubois; as well as his best friend, Chad Viator. Inurnment will be held in the Mausoleum at St. Alphonsus Catholic Cemetery. Cypress Funeral Home & Crematory, 206 West Lafayette St., Maurice, LA. 70555, (337) 740-3123, is in charge of Funeral arrangements.

The family of Chad Wayne Trahan created this Life Tributes page to make it easy to share your memories.

A Mass of Christian Burial will be held on Saturday,...

Send flowers to the Trahan family.