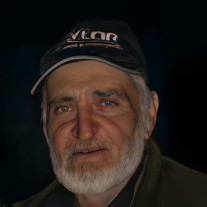 Carencro - Carl Edward Smoak, age 70, passed away on Tuesday, January 11, 2022 in Lafayette, Louisiana. Carl was born on June 21st, 1951. He lived out his early years in Charleston, South Carolina, where he and his family resided. During that time in Charleston, he helped his father build three homes on the family property where they lived. Later in life he followed work to Louisiana and never left. After living in several different areas in the state, he found his home in Carencro, where he resided until his passing. Throughout his career as a truck driver he traveled to many different parts of the country and would come home with stories of where he traveled and what he saw along the way. He always had a story to share with anyone who would listen and he always had time to help a friend or a neighbor with anything that needed to be fixed. He was a self taught mechanic out of necessity. Over the years of driving trucks and operating heavy machinery he learned how to repair anything that was on wheels. He truly enjoyed fixing things and he always had something that he was tinkering with. Often times he would have one of his daughters at his side helping him out with whatever he was working on. Carl loved his family and he will remain in our hearts forever. Carl is survived by his three daughters, Michelle Bearb, Pamela Denman, and Carla Smoak. Six grandchildren Chelsie Brame, Gauge & Shelbie Denman, Emma & Camille Bearb, and Sarah Smoak. Two great grandchildren Aubrey and Louis (Dru) Smith. His mother Barbara Truesdell, Three sisters, Patricia Lyons, Donna Flinn, and Barbara (Bobbie) Barrs; along with a host of nieces and nephews. He is preceded in death by his father, Carl Marin Smoak In lieu of flowers you can donate to NAMI New Orleans, a non profit organization that provides help and resources to people that have mental illnesses. If you knew our father, you knew that he struggled with mental illness throughout his life. Donate Now - NAMI New Orleans https://namineworleans.org/ Cypress Funeral Home & Crematory, 206 West Lafayette St., Maurice, LA. 70555, (337) 740-3123, is in charge of Cremation arrangements.

Carencro - Carl Edward Smoak, age 70, passed away on Tuesday, January 11, 2022 in Lafayette, Louisiana. Carl was born on June 21st, 1951. He lived out his early years in Charleston, South Carolina, where he and his family resided. During that... View Obituary & Service Information

The family of Carl Edward Smoak created this Life Tributes page to make it easy to share your memories.

Send flowers to the Smoak family.