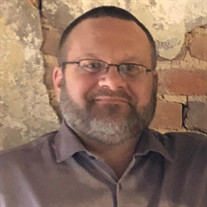 Lafayette- Anthony “Tony” Adkins Steed, age 50, passed away on Saturday, October 10, 2020 in Lafayette. Anthony was born on July 24, 1970 in Broward County, Florida. He was a long-time resident of Bradford, Arkansas and had lived in Lafayette since 2005. Anthony was a veteran of the U.S. Navy and served aboard the USS Dwight D. Eisenhower (CVN-69). After his time in the service he went on to work as a carpenter, he was truly gifted in his trade. Away from work he enjoyed watching basketball and football, and he was also an avid chess player. He had a joy for life, and for people, he never met a stranger. He was also an animal lover and leaves behind his beloved cat Mopsy. More than anything Anthony was a family man, he will be remembered as a loving husband, father and grandfather. He will be dearly missed, and his memories will be cherished. He is survived by his wife, Cynthia Martin Steed of Lafayette; his children, Christopher Steed of Lafayette, Tasha Steed of Searcy, Arkansas, Brittany Boyer of Breaux Bridge and Daniel Zeringue of Rivercrest, California; his grandchildren, Harley-Quinn Steed, Hunter Steed, Theodora Boyer, Bradley Zeringue and Austin Zeringue; and his brother, David Steed and his wife Nanette of New Bern, North Carolina. He was preceded in death by his parents, Roger Adkins Steed and Judith Elaine Rudisill; and his son, Aaron Steed. Online obituary and guestbook may be viewed at www.CypressFunerals.com Cypress Funeral Home & Crematory, 206 West Lafayette St., Maurice, LA. 70555, 337-740-3123, is in charge of arrangements.

The family of Anthony Adkins Steed created this Life Tributes page to make it easy to share your memories.

Send flowers to the Steed family.