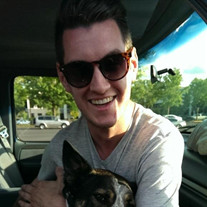 On Saturday, May 30, 2020 Amos “Alex” Perrill passed away in Louisiana at the young age of 33 after an ongoing and courageous battle with late-stage cancer. Alex was born October 25, 1986 in Lafayette, LA to Doug Perrill and Roxanne Meaux. Alex and his father settled in Portland, Oregon which he always called home. Being his uninhibited free-spirit self, he was never satisfied with where he was in life and what he was doing, always searching for something greater. He applied for the United States Air Force at the age of 29 and initiated the most audacious and life-altering decision he had so far. During Basic Training, the United States Air Force Honor Guard came to recruit Airmen to their exclusive ranks. Out of hundreds who applied, Amos was one of few selected to serve. After his graduation from Basic Training, he married his then-fiancée, Sarah Rose Andrew, February 2017 in San Antonio, Texas. True to military tendencies, he was immediately whisked off to Washington, DC to endure 8 more weeks of rigorous training, both physically and mentally draining and designed to break the strongest of people. Amos persevered and upon graduation he officially became a Ceremonial Guardsman. He was drafted into the Colors Element because let’s face it, he’s tall and handsome as hell. He began working all over the National Capital Region including Arlington National Cemetery, the White House, and the Pentagon. His main duties included overseeing the honorable burial of other Airmen to ensure their lives were honored from the service they gave to their country. He rose from an E1 rank to an E4 when he was medically retired as a Senior Airman in 2019. The friends and family take solace in knowing he was his iconically strong-willed self to the very end. Nothing, not ever cancer, could take that away from him. To sum up a complex young man, he loved his thick coif of hair, his dog Astro, and sports. He was a natural athlete who thrived amongst nature, dogs, solitude, and his own sass. He dreamed to eventually travel the continent in a truck before eventually settling down on a lot of land in the Portland area. We know he’s finding his father Doug in the next realm, sipping on Lagavulin neat and making sure we’re all keeping in line. A memorial service will be held in Amos’s honor at a date to be provided in the near future in Portland, Oregon. His wish was to be buried amongst the beautiful nature there. We will be doing a double service, burying his ashes next to his father, Doug, where they will both grow into their own individual trees, standing strong and infallible next to each other for centuries to come. We ask instead of flowers or cards that donations be made in his name to the VA or a Cancer research program of your choice.

On Saturday, May 30, 2020 Amos &#8220;Alex&#8221; Perrill passed away in Louisiana at the young age of 33 after an ongoing and courageous battle with late-stage cancer. Alex was born October 25, 1986 in Lafayette, LA to Doug Perrill and Roxanne... View Obituary & Service Information

The family of Amos Alex Perrill created this Life Tributes page to make it easy to share your memories.

Send flowers to the Perrill family.